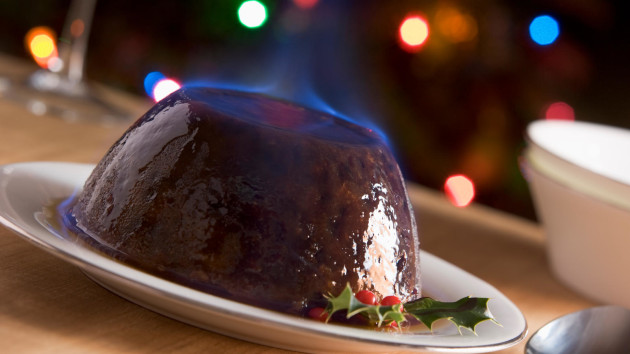 Are Brussels Sprouts Really From Brussels? An Explanation of the Traditional English Christmas Dinner 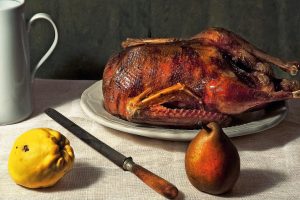 ‘Select a goose with a clean, white skin, plump breast and yellow feet: if these latter are red, the bird is old. Should the weather permit, let it hang for a few days: by so doing, the flavour will be very much improved.’

So begins the recipe for Christmas goose by the well-known 19th Century housewife Mrs Isabella Beeton, author of Mrs Beeton’s Book of Household Management, which became the manual of choice for housewives in Victorian England. These days, of course, for most of us the Christmas dinner ingredients come pre-prepared and packaged from the supermarket. The tradition of Christmas dinner has been with us since medieval times, since then it has gone through many changes but it hasn’t lost its magic and is the stuff (not the stuffing) that happy memories are made of. 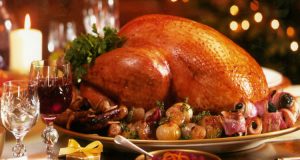 Christmas dinner is, of course, eaten in different ways and at different times around the world. Here in the UK we usually eat our Christmas dinner around midday on December 25th. Although Christmas goose is still cooked and eaten, around 76% of UK families will, this year, be tucking instead into roast turkey (that’s around 10 million turkeys and an awful lot of feather plucking). Popular history states that the first English King to dine on turkey was Henry VIII (presumably whilst he wasn’t busy beheading his wives) but it was Edward VII who really helped the Christmas turkey trend take off (sadly farmed turkeys can’t take off). There were practical reasons for eating turkey at Christmas instead of other meats. Turkey was first brought over to the UK from the Americas and it didn’t take people long to realise that here was a bird that gave enough meat to feed the biggest of families but wasn’t useful for either milk or eggs at other times of the year (well have you ever eaten a turkey omelette?)

‘Turkey Lurkey’ by the way, refers to a popular European children’s folk story in which ‘Foxy Loxy’ attempts to con ‘Chicken Licken’, Goosey Lucy’ and their friends to an unpleasant, edible end.

Turkey is a tasty meat but, if not cooked carefully, it can sometimes be a bit dry. One way of avoiding this, and of adding even more volume to a Christmas dinner, is to stuff the turkey with a stuffing made out of something tasty (usually mixed with breadcrumbs). Mrs Beeton recommended a chestnut stuffing and this is still popular in the UK today but another, more common turkey stuffing would be made out of pork sausage meat and flavoured with sage and onion. 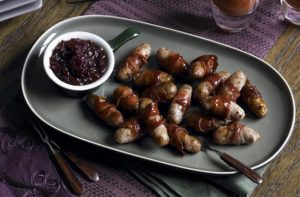 As if he didn’t already have enough meat on his plate with delicious slices of roast turkey and spoons full of stuffing, the discerning English Christmas diner will also eagerly anticipate two or maybe three pigs in blankets. UK pigs in blankets are different to the US version and are small pork sausages (also called chipolatas) wrapped in bacon and roasted. Incredibly popular with children (and grown up children) pigs are, these days, sold pre-blanketed and ready to pop into the oven. 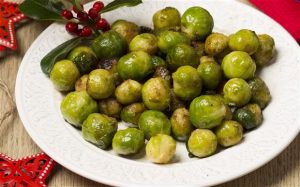 There is perhaps nothing that causes fiercer debate than the argument as to whether Brussels sprouts are a gustatory delectation or a taste abomination (unless, perhaps, you consider the arguments concerning how to cook them or whether or not they actually originated in Brussels). These strongly flavoured green vegetable balls come from the same horticultural family as the cabbage and are the Christmas vegetable we British love to hate. Brussels sprouts are undoubtedly good for you and there are those amongst us who love their slightly bitter flavour. Whether we enjoy eating them or not, in the UK we grow a huge number of Brussels sprouts (over 3,240 football pitches worth, despite sprouts making hopeless footballs) and most of us will have them present on our Christmas dinner table (if not on our plates). 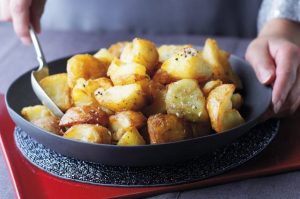 Not only is this blog post getting a bit calorie heavy, it is also becoming wordy so I will brush quickly past the roast potato. Suffice it to say that drenching any root vegetable in oil (or goose fat if you are a purist) and roasting it in a hot oven is going to render it delicious and a suitable soaking-up device for gravy (or ‘jus’ if you are feeling posh). 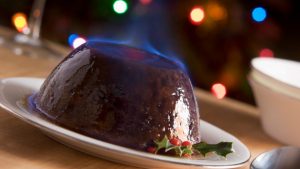 ‘Oh, bring us some figgy pudding,

Oh, bring us some figgy pudding,

Oh, bring us some figgy pudding,

And bring it right here.’

So goes the second verse of the popular UK Christmas song, ‘We Wish You a Merry Christmas’. Figgy pudding was sometimes given to carol singers as a Christmas Eve treat. Once called ‘plum pudding’ and now better known as ‘Christmas pudding’ this is the traditional sweet course that follows the burgeoning plates of Christmas dinner main course. Christmas pudding has undergone many iterations but today’s version is a rich mixture of dried fruit, suet, flour and alcohol. There are many traditions surrounding Christmas pudding, some of them linked with Christian church occasions. A favourite of these is ‘Stir-up-Sunday’, which is the traditional day for making Christmas puddings, a whole month before they are due to be eaten. Some people still add a ‘lucky’ coin to the pudding, with the finder being promised good luck for a whole year and many pour flaming brandy over the Christmas pudding (presumably because it gets dark at 4 o’clock and Christmas dinner takes so long to eat).

Today the average UK Christmas dinner contains over 1,400 calories, far more than we could hope to walk off during our postprandial attempts at exercise. Perhaps the best ever literary description of a Christmas meal was that of the Cratchits in Charles Dicken’s ‘A Christmas Carol’. This describes a much more meagre but maybe more appreciated Christmas dinner; we think the passage below sums it up nicely. 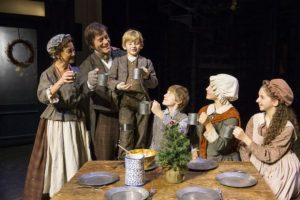 ‘At last the dishes were set on, and grace was said. It was succeeded by a breathless pause, as Mrs Cratchit, looking slowly all along the carving knife, prepared to plunge it in the breast (of the goose); but when she did, and when the long expected gush of stuffing issued forth, one murmur of delight arose all round the board and even Tiny Tim, excited by the two young Cratchits, beat on the table with the handle of his knife, and feebly cried Hurrah!’

If you enjoyed this wander around the English Christmas dinner table, you might also be interested in our guide to English seasonal slang.

A Christmas Carol is possibly one of the more easy Charles Dickens books to read. Take a look at our easy to read books for English Language learners.