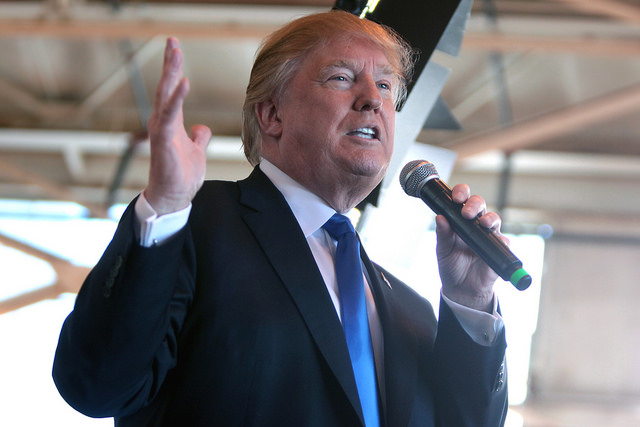 Over the past few months at English Trackers we’ve been fascinated by the US Election race and astonished by Donald Trump’s rising support. We thought we’d take a closer look at some of his speeches to try to understand why his use of language seems to be striking a chord with voters.

Trump really likes to drive his message home by repeating the same words and even sentences, just rearranged in a different order.

Just take a look at this quote:

Fourteen out of the 37 words are either “they” or “run”, which leaves the audience with one clear message to take away from this part of the speech.

In the following quotes, Trump is commenting on his once friend but now Democratic target Hilary Clinton.

“Hilary Clinton’s going to be a horrible President.”

“I think Hilary would be a terrible President.”

Using short, punchy adjectives such as this seems to be proving effective. We do wonder though if he lacks more sophisticated vocabulary and a detailed knowledge of Hilary’s political failures.

It’s easy to imagine any other candidate back up these claims with specific examples of where Hilary has made mistakes or voted for bills unpopular with Republican voters. Although this arguably would be a stronger case to put forward, a longer and more complex response could well lose some of his audience along the way.

The use of words such as “we” and “us” are commonplace in politics, used to empower voters and make them feel part of a campaign – think Obama’s memorable campaign slogan “Yes We Can” for an example.

However in contrast to Obama’s slogan which is more forward-looking, Trump’s slogan “Make America Great Again” instead looks back to a time when the US was perhaps a more considerable player on the world stage and with a stronger economy. He also regularly refers to “winning” and “losing” and how “We don’t win any more.”.

Although many of us might be praying that Donald Trump never becomes president of the United States, it’s clear that his use of language has a significant impact in helping voters to identify with him. We’ll leave with you with one last quote from Trump, brought to our attention by comedian John Oliver on the Last Week Tonight show – “I know words, I have the best words.”.

Compare Trump’s speaking style to some of the greatest speech-makers ever, with one of our most popular posts: