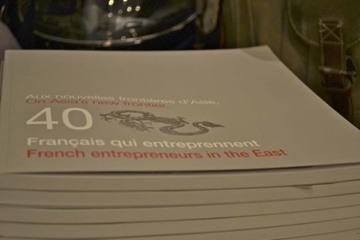 We talk to French journalist and author Anne Garrigue about the rather entrepreneurial way she launched her latest non-fiction book.

As contributors to the project – we translated it from French into English and did all the proofreading work – we’ve taken great pleasure in stepping into the world of e-books.

I opted to publish 40 French entrepreneurs in the East myself as I wanted to have complete freedom to write the first of a possible series.

As I had already published seven books, I wasn’t looking for recognition.
I did however have two key objectives:

1.    I wanted to work on this book with friends that I knew well professionally and whose work I admired.
2.    I absolutely wanted the book to be free to download on the Internet.

Could you tell us about the team of friends you pulled together to help you produce the book?

Sophie Lavergne and I had previously worked together on the same magazine. She was responsible for laying out the book which I wanted in a bilingual format. English Trackers  took care of translating the book into English and proofreading it. A friend offered to host the book for free on her French news site; this was perfect as her site addresses my target audience.

I also wanted the book to exist in paper form; a sort of VIP version, to be distributed at conferences and events. [Anne had the book printed in Singapore where she currently lives]. It’s three months since the book was launched at a conference bringing together 250 people from the French business community in Southeast Asia. Can you give us a first assessment?

Rapid and viral distribution of the digital version on the Internet – at least 3,000 downloads. As it’s free to download, it spread to many different sites. A quick Google of the book’s title or my name shows how far it’s spread. These results are far better than what the book would have achieved in bookshops.

Promotion and distribution through conferences – fascinating because of the people I get to meet, but tiring nevertheless.

Being able to write a book with a purpose– to strengthen the entrepreneurial spirit in France and to reveal the support role of the French entrepreneurial diaspora in SE Asia, and this entirely thanks to sponsorship by Arnaud Vaissié International SOS and Philippe Augier Museum Pasifika.

But I can see some drawbacks to this model of publishing:

Having to post the printed version to individual clients -I’m a writer not a distributor; this part is tedious and time-consuming!

No earnings for the writer – The sponsorship money covered the costs so I paid the team – and that’s all!

I’m planning to write a series, the next one will be about the adventures of 50 French entrepreneurs in China. For that I’ll work with a publisher for a print version – I’ll get an ISBN number and distribution in bookshops. However, I’m determined to keep the book free to download on the net.

This time to self-publish. For a journalist/author such as myself, it was a wonderfully entrepreneurial experience. I was able to oversee the whole process from conception to financing and from bringing it to life – in two languages – to seeing it distributed.

Taking the art of cutting out word noise to a new level.
A designer-turned-mapper who’s mapping and describing compactly the world’s most iconic cities!

Tap or faucet? Favorite or favourite? Herbs pronounced with the ‘h’ or without?
The many differences between British English and American English…

We have a tendency to say ‘zero’ it as ‘oh’
and our most famous example is ‘double oh seven’ or 007, the fictional British spy James Bond’s codename.