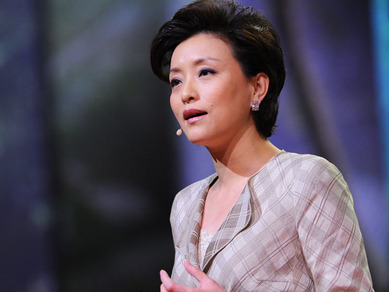 Yang Lan, a journalist and entrepreneur who’s been called “the Oprah of China,” offers insight into the next generation of young Chinese citizens — urban, connected (via microblogs) and alert to injustice. The chair of a multiplatform business empire, Yang is pioneering more-open means of communication in the communist nation.

“So after being interrogated by this Japanese manager for about half an hour, he finally said “So Miss Yang, do you have any questions to ask me?”

1.     “Interrogate” is a verb. It means to question someone in detail aggressively, closely and formally. Usually a prisoner or a suspect) For example: The police interrogated the thief for three hours, asking him for details on the missing necklace.

“The controversy was so heated that the Red Cross had to open a press conference to clarify it, and the investigation is going on.”

2.       “Controversy” is an adjective. It is a state of prolonged public dispute, concerning a matter marked by strongly opposed/conflicting opinions. For example: There was a lot of controversy about the new gun regulation law in America, people argued whether it should be passed. They couldn’t agree.

“And because, as you know, traditional media is still heavily controlled by the government, social media offers an opening to let the steam out a little bit.”

3.       “Let the steam out” is a figurative phrase. It means to let out anger that can been building up for a while. For example: I’m sorry I yelled at you, I just had to let some steam out.

“They find themselves sort of sandwiched between the urban areas and the rural areas.”

“So any accusations of backdoor dealings or corruption between authorities or business would arouse a social outcry or even unrest.”

5.      “Backdoor dealings” is a euphemism. It’s a nicer term than “corruption”. If you’re wondering what a euphemism is, it’s essentially using a nicer, politer term for something unpleasant. For example: “Downsizing” is a commonly-used euphemism when companies announce staff cuts.

“Social justice and government accountability is the first in what they demand.”

6.       “Accountability” is a noun. It is the state of being held responsible for one’s actions. To be liable, answerable. For example: You will be a project leader with accountability for specific achievements. We expect you to deliver results.

TED Explained– Sheryl Sandberg: Why we have too few women leaders