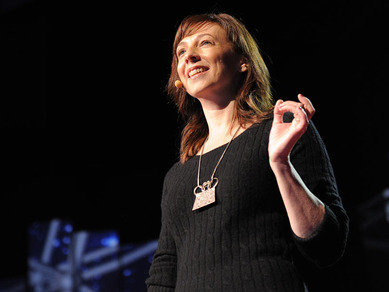 In a culture where being social and outgoing are prized above all else, it can be difficult, even shameful, to be an introvert. But, as Susan Cain argues in this passionate talk, introverts bring extraordinary talents and abilities to the world, and should be encouraged and celebrated.

Our world prizes extroverts — but Susan Cain makes a case for the quiet and contemplative.

1.      ‘All the times that I got the message that somehow my quiet and introverted style of being was not necessarily the right way to go, that I should be trying to pass as more of an extrovert.’

An “Introvert” (noun) is a shy person. A person mainly concerned with their own thoughts and feelings rather than with external things. For example: Nicole was a very quiet girl who was often occupied by her own thoughts. She was quite an introvert.

An “Extrovert” (noun) is an outgoing, socially confident person. A person mainly concerned with external things or objective considerations. For example: Natalie was a very sociable girl who loved meeting and talking to new people. She was definitely an extrovert.

‘And I always sensed deep down that this was wrong and that introverts were pretty excellent just as they were. But for years I denied this intuition, and so I became a Wall Street lawyer.’

2.      “Intuition” is a noun. It’s like a gut-feeling. Something that you just feel is right, but have no concrete reason behind. An example: I’m not too sure where we are, but my intuition is that we should turn left here.

‘Now this is what many introverts do, and it’s our loss for sure, but it is also our colleagues’ loss and our communities’ loss. And at the risk of sounding grandiose, it is the world’s loss.’

3.      “Grandiose” is an adjective. It has a negative connotation. It means grand, showy, and wanting to attract attention. For example: Not sure about grandiose claims and promises, but he’s definitely a trustworthy politician.

‘We have this belief system right now that I call the new group think, which holds that all creativity and all productivity comes from a very oddly gregarious place.’

4.      “Gregarious” is an adjective. It means to be outgoing and enjoy the company of others; sociable. For example: John was shy as a young child. But as he grew up, he discovered his sense of self-confidence and is now a gregarious young man.

‘We sat in rows of desks like this, and we did most of our work pretty autonomously.’

5. “Autonomy” is a noun. It means to have independence and freedom; the right to self-govern; to be able to make your own choices and decisions. For example: We need to give them that autonomy, so long as they are held responsible for their actions.

‘And this is because solitude is a crucial ingredient often to creativity. So Darwin, he took long walks alone in the woods and emphatically turned down dinner party invitations.’

6.      “Solitude” is a noun. It means the state of being or living alone; a place with little human activity. For example: He lived a life of solitude high in the mountains, away from the busy city.