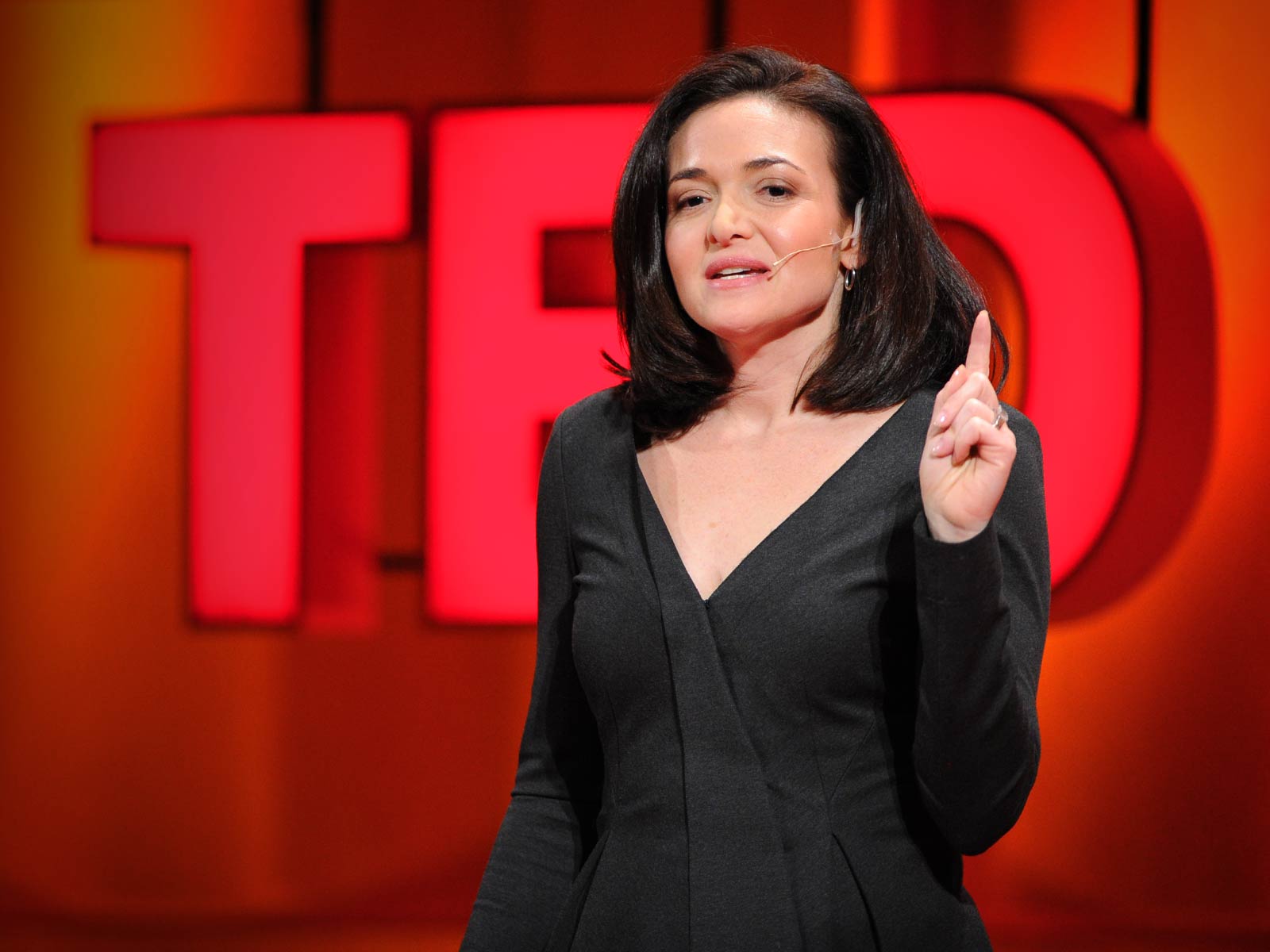 Sheryl Sandberg gave this TED talk in December 2010 and ultimately a book grew out of this speech. Her book, published in 2013, is entitled: Lean In: Women, Work, and the Will to Lead.

So what does ‘lean in’ mean?

With these two words Sheryl Sandberg coined a new phrase. I know because I checked in the dictionaries and it’s not there – yet!

By ‘leaning in’ Sandberg means women should embrace their professional ambitions and not pull back when they start to plan a family. If you imagine a body leaning in, you picture determination, forward thrust, and fighting the drag of the wind pulling you the other way.

Sandberg’s talk focuses on the conundrum of “Why we have too few women leaders”. She summarises her TED talk thus: “My talk today is about what the messages are if you do want to stay in the workforce, and I think there are three. One, sit at the table. Two, make your partner a real partner. And three, don’t leave before you leave.” Ultimately her talk is about keeping women in the workforce and how both the women themselves need to act (by leaning in) and how society needs to treat them. Click here to find the official TED transcript.

Vocab taken from the speech:

C-level jobs – the C stands for Chief, so these are the job title of the highest executive jobs in a company, e.g. Chief Executive Officer (CEO), Chief Operating Officer (COO) etc.

Percent – note that percent is written in full when writing prose. If you are writing a scientific paper or a report full of data then use of the % symbol is correct

Flextime – mostly referred to as ‘flexitime’ in the UK – is when employers give employees a flexible working arrangement. Under this arrangement, employees can organise their working hours more flexibly to suit family, transport and work schedules.

For example: At my new job I work flextime, which means I can pick my daughter up at school three days a week. She loves it.

Underestimate – to estimate something to be smaller or less important than it actually is.

For example: I had totally underestimated how stressed I’d be when my second child came along.

Mentoring – a mentor is an experienced and trusted adviser. In the workplace, an older more senior colleague may mentor employees.

For example: He met his mentor at university and benefited from his support for many years.

To top out – means to reach an upper limit.

For example: Their annual training budget tops out at US$25,000.

Non-profit world – refers to charities and other organisations that do not operate primarily to make a profit. You will also see ‘not-for-profit’ used.

For example: My dream has always been to work in the non-profit sector.

Corner office – this would be one of the best offices on a floor, with possibly windows on both corner walls.

For example: With my new promotion I get to move into the corner office. I’m thrilled!

At the outset – from the start or beginning of something.

For example: From the outset of the project we were understaffed.

Bio break – this is slang for interrupting work to perform bodily functions, therefore, to go to the toilet.

For example: I need to speak to Steven right now. Where is he?

He’s on a bio break; he’ll be back shortly!

Expressions taken from the speech:

“A couple of years ago, I was in New York, and I was pitching a deal.”

‘To pitch a deal’ means to present an offer to someone. You can also pitch an idea. In the UK we tend to say ‘to make a pitch’.

For example: I just pitched my idea for the new marketing approach to my boss and he loved it.

“When I go to the Mommy-and-Me stuff and I see the father there, I notice that the other mommies don’t play with him.”

‘Mommy-and-Me stuff’ – this is very much an American English expression referring to an activity that a mother does with her child (mainly babies and toddlers). Note in British English we call our mothers ‘Mummy’.

For example: Every Tuesday I go to Mommy-and-Me swimming with my toddler.

“We’ve got to get women to sit at the table.”

Sit at the table

This literally means to sit at the table, but not just any table, it mainly refers to women sitting at a boardroom table. Sandberg also means that women should join in and not exclude themselves from meetings by taking a seat on chairs placed on the edge of rooms.

For example: In Norway where they have a gender quota in place, we generally see more women sitting at the table.

“And if that wasn’t good enough motivation for everyone out there, they also have more — how shall I say this on this stage? — they know each other more in the biblical sense as well.”

To know someone in the biblical sense means you’ve had sexual intercourse with them. This is from a Biblical reference, where to ‘know’ someone meant to have sex with them.

For example: John’s a great friend, I know him very well. Not in biblical sense of course!

This is another new expression coined by Sandberg in reference to doing something. It means to pull away and to no longer give your all to the activity.

For example: My mentor told me that she thought I was leaning back. She implored me to lean in and still strive for the top.

“And if two years ago you didn’t take a promotion and some guy next to you did, if three years ago you stopped looking for new opportunities, you’re going to be bored because you should have kept your foot on the gas pedal.”

To keep your foot on the gas pedal means to continue to drive towards your goal without pulling back (or leaning back)!