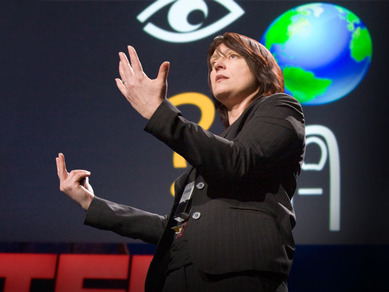 Talk Summary:
This demo — from Pattie Maes’ lab at MIT, spearheaded by Pranav Mistry — was the buzz of TED. It’s a wearable device with a projector that paves the way for profound interaction with our environment. Imagine “Minority Report” and then some. Pranav Mistry is the inventor of SixthSense, a wearable device that enables new interactions between the real world and the world of data.  Click here to read the official TED transcript.

1. “Intrigued” is a verb. It means to arouse the curiosity or interest of; fascinate.
I met a man who travelled around the world for 18 months. I was very intrigued by his stories and I wanted to hear more.

2. “Evolve” is a verb. It means to develop gradually, esp. from a simple to a more complex form.
Most people believe that humans evolved from apes.

3. “Seamless” is an adjective. It means moving from one thing to another easily and without any interruptions or problems.
The performance was seamless. It went really smoothly without any problems.

“So we don’t really have easy access to all this relevant information that can just help us make optimal decisions about what to do next and what actions to take.”

4. “Optimal” is an adjective. It means the best or most effective.
For optimal effect, please make sure you change the batteries every 30 days.

5. “Cobble” is a verb. It means to to make (something) by putting together different parts in a quick way.
There’s not enough time, so I’ll quickly cobble together a presentation.

6. “Portable” is an adjective. It means able to be carried or moved easily, especially by hand.
I bought a portable music player. I can carry it around and play music anywhere now.