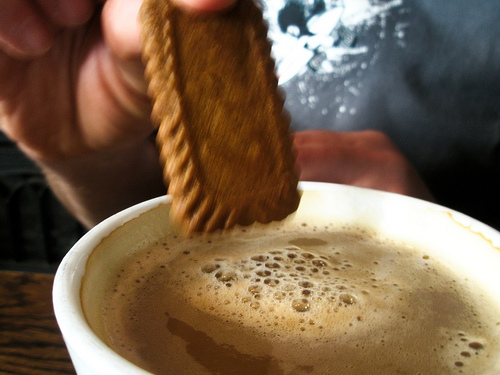 The United Kingdom is obsessed by tea and the drink has its own British slang! Here’s a light-hearted introduction to British tea slang.

When Brits drink tea they invariably reach for the biscuit tin (not cookie jar) so they can munch on a couple of biscuits while they drink their favourite drink. So, in the UK, if someone wishes to offer you tea, they may use any of the following terms:

Many English people use teapots to make tea. They brew the tea for 2-3 minutes and generally drink good strong tea with milk.
For ex: Shall we have a brew?

Be careful though, if you’re on your way to the pub and someone offers you a brew, it means a pint of beer! Char
From the original Chinese character cha 茶 – see my post on Chinese loanwords.
For ex: Let’s sit down and have and cup of char.

A builders brew
Builders on construction sites brew up tea to drink on their tea breaks and they seem to like it strong, milky and with two sugars. So builders brew has come to refer to tea served this way.
For ex: How do you take your tea? Builders tea is fine for me.

Meals – tea can also refer to meals, which can be a bit confusing for the outsider.

Biscuits
The British rank among the top five tea-drinking countries in the world, around 2.74kg per person per year and what goes down well with a cuppa but a biscuit. A little search for figures on the web revealed that on average Brits consume a colossal 8kgs of biscuits per person per year. We don’t just eat the biscuits; we dunk them in our tea. We like them to be infused with our national drink and just when they look like they will fall into the tea we hoover them into our mouths. I even found a biscuit appreciation society where they provide wonderful instructions in the art of dunking.

Personally, I believe the best cup of tea is the one made for you by someone else!

Endangered words – these words are slowly disappearing from the English language

We all write a lot, but do we rewrite enough? On the importance of writing well

How to cut out word noise