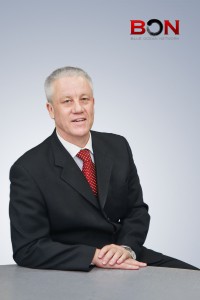 On the Job – The TV Presenter/Journalist Blue Ocean Network, a.k.a. BON TV, an independent TV channel broadcasting from and about China to the U.S.

Presenter/producer/reporter/editor – whatever you’re having yourself…

How important is being able to speak/write good English in your job?

As we broadcast exclusively in English – at least for the moment – fluency in the language would certainly be considered ‘a good thing’. In fact all four key language skills – reading, writing, listening and speaking – come into play in TV broadcasting. News broadcasts are generally scripted and read to the camera, the trick is to make it appear to the viewer that you’re not reading. This means writing in a more natural, informal style than for print media and delivering it in a more conversational way. A chat show or interview is more interactive and spontaneous, so it’s important to be able to speak fluently – without too much hemming and hawing. Interviews also require the ability to listen to what the interviewee is saying – something that interviewers (including me) anxious to get through their question list sometimes forget!

Does your field have its own particular jargon? Could you share some of the more unusual terms with us?

Indeed we do, and these tend to vary from country to country, and even organisation to organisation, within the English-speaking world. These may not be unusual but, for what it’s worth, here are a few:
Autocue or teleprompter – the machine that allows the newsreader to appear fluent and omniscient when he, or she, probably isn’t.
‘Stand-up’, ‘piece-to-camera’ or PTC – the part of a news report when the little actor hiding inside every reporter comes bubbling to the surface and they speak directly to the viewer, sometimes with more hamming than is strictly necessary.
B-roll, footage, cover – video used to cover the reporters voice in a TV report; the background pictures that explain visually what the reporter is saying.
Streeter/voxpop – short clips of members of the public giving their inimitable opinions.

Have any new terms been coined in your field recently? If yes, which?

Well I can think of one that needs to be coined! Because users of the Chinese microblogging site Weibo are becoming so influential – and quotable – a snappy English term to refer to these individuals would be useful. Microbloggers is too clumsy; Tweeters verges on IPR infringement; Net users? They are – but so are millions of people who have never heard of Weibo. Suggestions welcome!

On occasion I will ask another presenter for their opinion on a script I have written, more often for views on the content than for typos or mistakes. Before going to studio I read through anything I have written to double check it makes sense; better to come across the mistakes before the camera is rolling. For the autocue script, spelling and grammar are not so important.  However for ‘supers’ (the bar, usually at the bottom of your screen, containing names or other text) spelling, capitalization, etc. are crucial. We use U.S. English as standard, so as a speaker of British (or even Irish) English, I sometimes have to check with an American colleague. Spelling changes are fairly straightforward, but vocabulary can cause confusion. I still come out with words like lorry (for truck), jumper (for sweater), carriage (for rail car) or row (for argument) – all of which tend to mystify my transatlantic teammates.

Mistakes are mistakes and we are all guilty from time to time, but inaccurate usage of words can be annoying. Everyone has their pet peeves – mine is the widespread use of refute (especially in journalism) to mean deny or reject when there are already perfectly good words to describe this concept (deny and reject are two that spring to mind!) Refute has the narrower meaning of proving wrong or false through argument or evidence – hence the ‘irrefutable evidence’ much beloved of lawyers. This is, however, a lost battle I fear.

Would you like to add anything you think our readers would find interesting?

Use your ears AND your mouth whenever possible (and use refute correctly!)