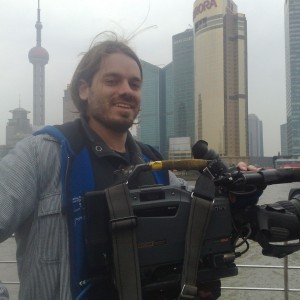 On the Job – The Documentary Film-Maker I’m a cameraman and video editor.

How important is being able to speak/write good English in your job?

In my current job not that important.  I’m lucky enough to be given the opportunity to concentrate purely on the visual side of things both during shooting and editing.  The journalist I work with has to voice and write scripts in English.  She is basically bilingual in Mandarin and English but English isn’t her first language so occasionally I correct the scripts that she writes, even after they’ve been sub-edited in Australia.  Those Aussies always did have a tenuous grasp of their mother tongue!

Does your field have its own particular jargon? Could you share some of the more unusual terms with us?

There is lots of special jargon in film-making.  Some examples include:

Attenuation – This refers to signal loss in a transmission system

Gain – The level of amplification of a signal.

When you’re working on your own projects – such as your documentaries – who writes the script?  How do you balance the spoken word read by the narrator and the visual content?

When I have made documentaries I have always written the script myself, but with the stuff I work on at ABC I get given a script and a voice-over by the journalist I work for.   We make on average one 7-minute news feature each week.  We have to try and get as much information over as possible in those 7 minutes so the script writing is very important to the report.  Accompanying the pictures in the finished piece there is always the reporter’s voice-over and two or three small ‘grabs’ from interviews we’ve conducted to illustrate the point that is being made in the report.  It is rare that we use music except to open the report.  The visuals have to try to illustrate the voice-over but not directly.  In fact often the visual material dictates the words.  I always give all the footage I’ve shot to the journalist and she writes to the pictures, they help dictate the script to a certain extent.

In documentary narration one has to explain sometimes complex things in the most basic English as possible so they are easy to follow and understand.  Narration can bridge different parts of the story very efficiently but one has to be careful how the language is used.

For some reason I’ve noticed a lot of Chinese using the turn of phrase “how about?” when talking about various subjects.  An example use of this phrase would be something like “how about the weather tomorrow?”.  I understand what they mean but it ain’t proper, innit.

What advice would you give to learners of English to help them improve their English in the workplace?

Listen to BBC podcasts; the presenters invariably speak ‘the Queen’s English’ which is how everyone should speak English as far as I’m concerned!