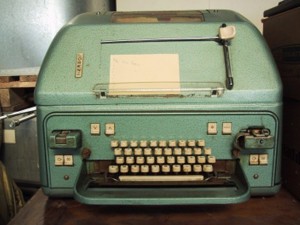 Disappearing words – do you ever wonder how words get pushed out of the dictionary to make way for new words?

Dictionary compilers track how often words are used and those that don’t appear any more are basically deemed to be obsolete. The article quoted Dr Ruth O’Donovan at Collins Language Division in Glasgow as saying,

“We track words using a very large database of language which is a very large collection of various texts from spoken and written language, including books, newspapers and magazines so we can track language change over time.”

Some examples of words that have become obsolete are ‘cyclogiro’, a type of aircraft propelled by rotating blades, and ‘charabanc’, a motor coach. Technological advances make the machines obsolete and then the words drop out of use.

From walkman to iPod!

I have suffered my children’s derision when for some reason my brain has given me the word ‘Walkman’ instead of iPod. These children of the 90s have certainly never seen a telex machine (they probably don’t even know what one is) and have never used a typewriter. They barely send emails as they do all their communication through social media, so the expression ‘to write a letter‘ is definitely not part of their lexicon!

Can you think of any words that you used as a child that have gone out of fashion or been rendered obsolete through technological advancement? On the other side of the argument, which words would you like to see removed from the English language?

Insufferable suffixes – all these new buzzwords have been cropping up and some of them are downright ridiculous. Twitter-isation? Really?

Describing the Great Wall in 15 words or less is no easy task. Learn the art of brevity from this man of few words.

‘Blue sky thinking’, ‘pushing the envelope’, ‘thinking outside the box’, are these terms used in your workplace?