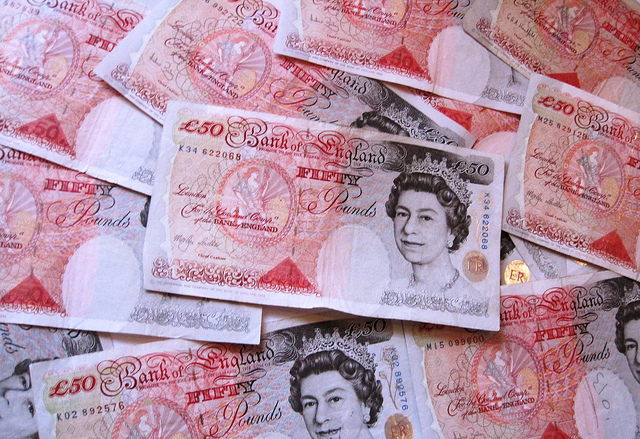 The British population most definitely has an island mentality and this was never more apparent than when the euro was introduced on January 1st 1999. We opted not to join the Europe-wide currency and have stubbornly kept our pounds and pence.

Our currency is officially known as pounds sterling. One pound is subdivided into 100 pence, the singular of which is one penny. The most commonly used slang term for a pound is a quid and it doesn’t have a plural.

For ex: I spent over a hundred quid last weekend without even realising it!

If a British friend asks to borrow a fiver from you, he means a five pound note. We also refer to a ten pound note as a tenner.

Apparently we imported the word grand, which means a thousand, from the States. It’s uncountable, so we’d say:

We use the symbol G when we want to write thousands in shorthand.

For ex: You mean he paid 300G for a house in the suburbs!

We use K (from kilo) when we write with digits but we also say it when speaking, so that phonetically it would sound like kay.

Example in written form: In my new job I’ll be earning 75K a year.

Example in spoken form: In my new job I’ll be earning 75 kay a year.

Other slang expressions for money

As well as quid, we have a whole series of words that we use to refer to money, such as:

Dosh is uncountable, so you can’t have doshes! We say a heap of dosh or heaps of dosh.

For ex: My neighbour has his own business and he’s got heaps of dosh.

We also use the term smackers instead of pounds but rarely in the singular form.

For ex: My aunt left me five hundred smackers in her will.

This expression has negative connotations, so filthy lucre would refer to money that has been illegally acquired.

For ex: Where’s my share of the filthy lucre then?

If you’re in London you may overhear many other terms for money and many of these will come from cockney rhyming slang.

Some of the London slang for money is based on animals thought to have originally appeared on ruppe banknotes. It is believed these terms were imported from India by returning servicemen. You can find out more about that in this wiki post.

Here are a few:

If you want to read more about cockney rhyming slang and money, read this BBC article.

Other British expressions to do with money

We use this expression a lot. It means to make a profit.

For ex: If I can sell all this stuff second hand then I’ll be quids in.

If a British person tells you they’re off to spend a penny and then they promptly disappear, it’s because they’re actually going to the toilet. In the old days, you had to pay one penny to use the public toilet and the expression ‘to spend a penny’ has lived on to this day.

For ex: I’ll be back in a minute, I’m just off to spend a penny!

A penny-pincher is someone who is unwilling to spend money.

For ex: I hate going out with John, he’s such a penny-pincher that he never offers to buy everyone a round of drinks at the pub.

This means that something is incredibly expensive.

For ex: Susan just had a new extension built onto her house, it’s beautiful but it must have cost her an arm and a leg!

How to write about money – with both letters and digits.

Have you ever overheard some rather strange terms for money? Let us know in the comments below.

Now that you’ve got the slang down, you’ll want to work on your accent.

How to Improve Your English Accent