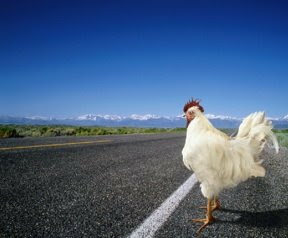 The Art of Telling a Joke ‘A chicken crossing the road: Poultry in motion’

Wherever and whoever we are, we all love a good joke. When we tell a funny anecdote or witticism, we show off our verbal athleticism. Clever puns display our ability to manipulate language and entertain our companions.

I won’t bore you with the oldest (and least funny) jokes in the English language. Remember the ‘Why did the chicken cross the road?’ jokes, blonde jokes, ginger jokes, men vs women and wives vs husbands jokes? Most ‘street jokes’ like this are more likely to make you groan than chuckle.

Do you remember the last time you laughed uncontrollably? What makes something really, truly funny? Here are some of the nuts and bolts that hold jokes together:

1)    The set-up: Think of all those ‘A man walks into a bar…’ ‘I was in a restaurant the other day when…’ jokes. Describing the situation before launching straight into the joke is essential, especially if the story is a personal anecdote.

2)    Storytelling: A well told joke will weave a story with a beginning, middle and an end together. The really memorable jokes build up an audience’s expectations and then surprise them. Take this example:
‘A magician was working on a cruise ship in the Caribbean. The audience was different each week so he did same tricks over and over again.

The problem was, the captain’s parrot saw all the shows and began to understand how the magician did every trick.

He started shouting in the middle of the show: ‘Look, it’s not the same hat! Can’t you see that he’s hiding the flowers under the table! Hey, why are all the cards the ace of spades?’

The magician was furious but this was the captain’s parrot and he could do nothing. Then, one day the ship sank. The magician found himself floating on a piece of wood with the parrot.

They glared at each other but said nothing. Finally, after a week, the parrot said: ‘OK, I give up. Where’s the boat?’’ 3)    Punch lines: These are the parts of a joke that get remembered. They tend to be short, snappy sentences that give the joke a twist and abruptly reverse the direction that the joke has been heading in. Stand-up comedians spend hours perfecting their punch lines.

4)    The Rule of 3 or ‘Comic Triple’: This is a classic joke telling technique. The human brain responds instinctively to lists of three. Think about how many ‘blonde, brunette and red head’ or ‘Englishman, Irishman and Scotsman’ jokes there are in the English language. A blond, a redhead and a brunetter were…

5)    Timing: With good timing a comedian can turn a mediocre joke into a good joke. A well delivered pause is a powerful thing. It makes listeners wait expectantly for the punch line.

6)    The Pun: Plays on words (or puns) are the lifeblood of language. They are what test the boundaries of language and consequently help it to evolve, move forward and ultimately keep it alive. Some good (and bad) puns:

–      I was arrested at the airport. Just because I was greeting my cousin Jack!
All that I said was “Hi Jack”, but very loud.

Here are a few of my favourite jokes:

– A dyslexic man walks into a bra…

– At a party Lady Astor said to Winston Churchill: “Mr. Churchill, you’re drunk!”
He replied “Yes, and you, Madam, are ugly. But tomorrow, I shall be sober.” – An Englishman, an Irishman and a Scotsman walk into a bar. The bartender turns to them, takes one look, and says, “What is this – some kind of joke?”

– China has a population of a billion people. That means even if you’re a one in a million kind of guy, there are still a thousand others exactly like you. (A. Whitney Brown)

English pronunciation seems to have rules made up by someone on drugs.
Give this a go: “I take it you already know, Of tough and bough and cough and dough?”

You actually know a lot more Chinese than you think!
This post charts the journey of some ‘borrowed words’ from Chinese to English.

Tempus fugit
Time ticks by inexorably and we must talk about it, allot it, plan for it and find the words to express it.